A DIFFERENT KIND OF ART FROM A BEAUTIFUL DANCING HORSE!!!

New banner I made for my Blog Heading, from a portion of one of my paintings.
Luv that Red......... 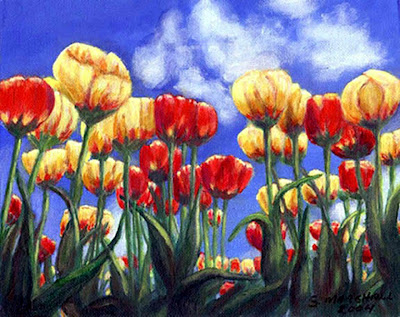 Look what nature has brought us!!!!!
From my archives, some Color for our Lives.
My favorite time of the year.........

Ok, so it didn't work the last time and I took a sabatical for a few weeks........Hope you guys are still with me cause.......I'm really back, and a convert to boot. Just switched like 5 minutes ago. Wanted to get that part over before the weekend, so far so good. Looks like everything is here that should be. So now I'll have the weekend to play with the rest of the new toys.
In the meantime, here's a look at my new cat Keeta, that I saved from the SPCA before Xmas. He's a year and a half, and we have had a great time getting to know one another. My little Cockatiel Kiwi, died suddenly, and I was just so lost, that I went within 2 weeks and found another little animal that needed a home. So I'm post some pictures of my guy.
Had a bit of a scare this week with that cat food recall, as he was on Iams, but the dry food. So the vet says he looks fine, and it's just the wet food they are concerned about.
That's all for now. Will be posting some paintings next.
4 comments: Links to this post